H.E. Major General Mohammad Ashab Uddin, ndc, psc was received by His Highness the Amir at Bayan Palace and exchanged words of courtesy and pleasantries. The Ambassador sought His Highness the Amir’s blessings and supports to perform his duties to enhance the existing bondage of bilateral relationship between two brotherly countries. H.H the Amir praised the Bangladesh community and Bangladesh Military Contingent for their contribution in Kuwait. 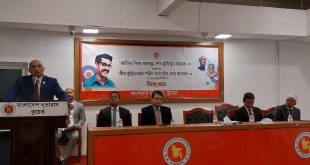